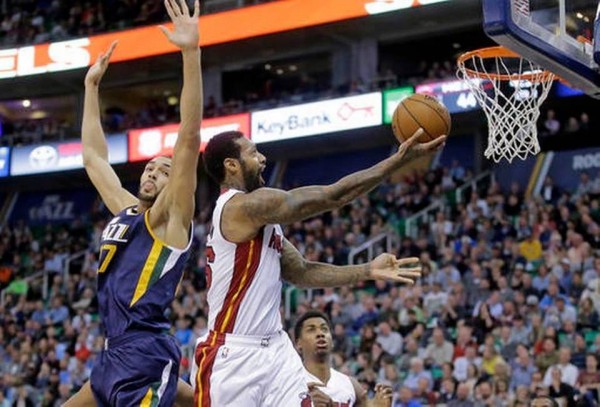 The Miami Heat may be in the midst of discovering one of the hidden assets they have available to try and turn around a season that saw them drop 12 of their first 17 games. That commodity appears to be solid play from the team’s bench that was most recently on display in road wins at Denver and Utah on consecutive nights.

Garnering a good deal of the credit for this turnaround are James Johnson and Tyler Johnson, with the recent addition of Wayne Ellington also showing early signs of promise. The two Johnsons are averaging a combined 22.7 points per game and Ellington has managed to contribute an average of 16.0 points per game in his first three appearances. Such production raises the potential for a much stronger team once this recent rash of injuries subsides.

“It’s a big energy group for us,” Heat head coach Erik Spoelstra said of his bench. “We want both units to be able to defend at a high level, but that group defends and also gets stops and turns them into transition opportunities. And those can be big time relief points — those fast breaks. Especially in a game like this where you’re playing a lot of half-court basketball against a set defense. If you’re able to get some relief (baskets) in transition – like Tyler and JJ did – that can be what you need to get you over the hump and that proved to be the case.”

Miami’s bench contributed 55 points in the victory at Utah, 24 hours after it chipped in with 50 against the Nuggets. James Johnson especially stepped up in Thursday’s dramatic 111-110 win over the Jazz that went down to the final buzzer. He managed to score 24 points and grab six rebounds in the narrow victory. Most importantly, he scored the final Heat points and then obscured the vision of the Jazz’s Gordon Hayward on the final missed shot. James Johnson spoke about his defensive approach on that final shot.

“I knew he likes to pump fake when he snakes or curls around,” James Johnson said. “I knew there was only three seconds left. I had great teammates there on the elbow. All I had to do was jump late.”

The effort by the reserves was all the more inspiring because Miami had just nine players available because of Derrick Williams’ back trouble and Luke Babbitt’s hip issues.

James Johnson’s all-around play hasn’t gone unnoticed by Spoelstra, who indicated that this presents the forward with a solid opportunity to finally make his mark in his eighth season in the NBA.

“We wanted to be open minded to whatever he wanted to push himself to become,” Spoelstra said. “Sometimes in this league it just depends on (being in) the right place with the right opportunity, the right timing. We’ve always respected the way he competed against us. We felt because of his versatility and his skillset, his ability to play on both ends of the court, it would be a good fit with us. But he did his part. He came in early, got in great shape. He’s lost a great deal of weight. I think he’s probably in the best shape he’s been in in his career and we’ve embraced him and who he is. He made a lot of big plays and obviously the dunk will be a play you remember. But defensively, those were tough covers for him.”

One other player who had also stepped up for the Heat is Ellington, who’s also in his eighth season. He scored 14 points during the first half against the Jazz before adding three more after the break. That effort came one night after he poured in 22 against the Nuggets.

“It takes grit, it takes toughness,” Ellington said. “That’s what we showed all night long. We knew coming in here it wasn’t going to be easy. They’re a very good basketball team. But we remembered what happened at home (in a 102-91 loss on Nov. 12). They came in and got us pretty good. We came in and left it all out there on the floor.”

While it’s far too early to be thinking about a playoff berth, Miami’s ability to weather this barrage of injuries and fashion a sturdy bench only has it 2.5 games out of the eighth spot. Even a fourth spot currently stands only four games away with 63 games to play. Thus, there’s plenty of time to create a steady flow between starters and reserves and avoid the specter of slowly fading out of contention.

Miami’s mini-Western swing ends on Saturday night when they face the Portland Trail Blazers in a game set to tip off just after 10 p.m. ET. The Heat then return for a home game next Tuesday against the New York Knicks, part of a rough week that will see it play four games in five nights. The last three of those games will all be on the road.
[xyz-ihs snippet=”Responsive-ImagenText”]