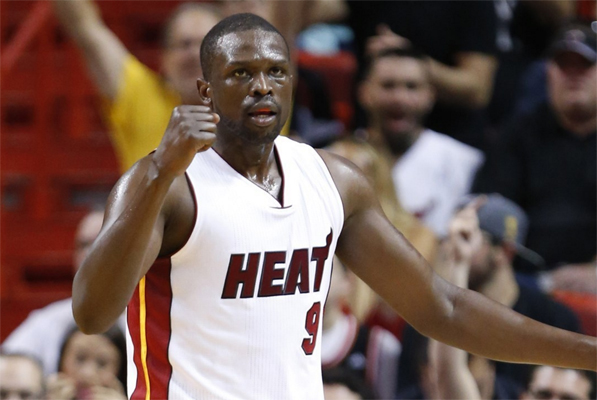 Luol Deng has been on a bit of a tear since the All-Star break. Lately, he’s looking more like vintage Chicago Bulls Deng than the Deng we’ve watched as a member of the Miami Heat for more than a season and a half now.

Since starting at power forward in place of Chris Bosh, who sources fear may be done for the season after another blood clot scare, Deng has made a significant impact on each end of the floor.

On the season, Deng is averaging 11.5 PPG and 5.4 RPG, but since the All-Star break, he’s boosted those averages to 18.7 and a staggering 11.1, respectively. Part of this six-game run has included an astounding five double-doubles for the former Duke University product, even though he is technically undersized (6’9″ but only 220 lbs) at his position.

Right now Deng is doing it with straight hustle and basketball wit. His defense has been top-notch as of late; he’s pounding the glass, chasing loose balls and putting back misses off of errant shots from teammates.

While all looked as if it were lost for a Heat team that is vastly undermanned, it seems that Deng’s play has helped light a spark in the locker room and on the floor.

Now that Joe Johnson has been added Miami’s roster, it will be interesting to see how Deng’s minutes will be affected. Technically Johnson is a shooting guard/small forward and Deng is a small forward/power forward, but they are about the same size and have similar skill sets, minus Deng’s clear advantage as an elite defender.

Look for his scoring numbers to drop a bit with Johnson in the lineup, but don’t be surprised if Deng continues to take full advantage of Bosh’s absence and continues to outwork, outhustle and outsmart opponents.

Deng’s recent boost in production may not be entirely due to him simply “stepping it up,” though.

Goran Dragic has been looking like the point guard we all saw those last couple of years in Phoenix. He’s been doing an outstanding job of running the offense, setting the game pace, and getting his teammates involved. Solid point guard play, on any team, should make everyone in the lineup look better. When a good point guard is playing well, he sets guys up, establishes the flow, etc. Right now, guys like Dwyane Wade and Luol Deng are feeding off of just that.

Once Dragic, Wade, Johnson, Deng and Hassan Whiteside start getting comfortable in the starting lineup together and start establishing clearly defined roles, teams are going to lament having to match up with this uber-versatile Heat team. Until then, there’s nothing to do but watch the process unfold.

Erik Spoesltra is known for obsessively tinkering with his lineups in attempts to establish the most productive possible flow depending upon the situation. Currently, he has more tinkering to do, especially with the addition of Johnson, Deng playing so well, and the fact that Justise Winslow is looking like the odd man out despite being one of the team’s best defenders.

As of now, the Heat have only 23 games left in the regular season to figure it out, but an excess of talent and surging players at all positions are one of those “good problems” to have.
[xyz-ihs snippet=”Responsive-Ad”]