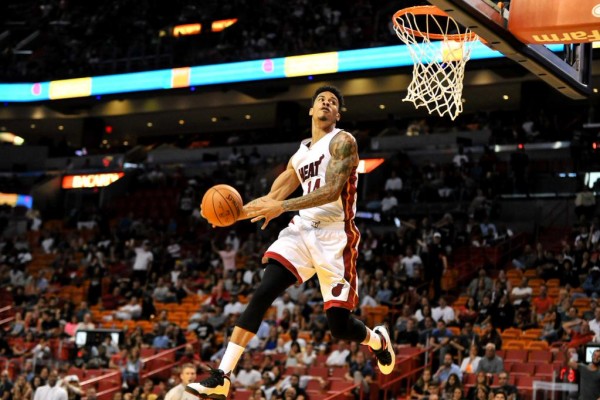 When the Miami Heat signed Gerald Green to the veteran’s minimum this offseason, it was with the expectation that he’d be a top player off of the bench.

Green is coming off of two consecutive seasons where he had established himself as a top-flight three-point shooting threat with the Phoenix Suns. During the 2013-14 season, the swingman averaged a career-high 15.8 points on 40 percent shooting from beyond the arc.

While Green remains a threat to go on a scoring binge at any moment, it also comes with the idea that the 29-year-old can be extremely inconsistent with his scoring.

Take for example Wednesday’s 100-97 preseason loss to the Orlando Magic. Green went scoreless through the first three quarters and had attempted just one shot as the Heat were down 74-66.

Before you know it, the former Slam Dunk Contest champion went off—he scored 11 points in less than three minutes, including three three-point field goals, which ended up tying the game. Though he would end up leaving less than two minutes after his final basket, Green had demonstrated what he brings to the table as a scorer.

Green gave credit to his teammates for calming him down before the scoring binge:

“My teammates did a great job of calming me down. Once I get an opportunity, I just try to make something happen.”

The offensive-driven swingman is aware that he doesn’t lack the ability to score—it’s his defense that needs work:

“Offense comes easy for me. I know if I go down and lock my defense down, nine times out of 10 we’re going to win. I know my role is to have energy on both ends of the floor. I’m really focusing on defense, that’s what I’m really trying to focus on. Scoring is easy for me. I’m not really worried about scoring.”

The Heat lacked in bench scoring last season, ranking among the bottom five in the category. The team is going to need Green to lead the bench unit in the scoring department, but for the swingman to remain on the court for key stretches, he will have to continue to improve on the defensive end. Green stresses it’s the only way Miami will become a better team:

“It’s the defense that I’m trying to work my best at. I know that’s the only way we can become a better team, if I’m a better defender.”

Because he plays on a team that is very heavy on depth at the shooting guard and small forward positions, it is an absolute necessity that Green becomes a better two-way player.

With the Heat having six more preseason games to play, the 6’8″ swingman will have plenty of time to hone his craft.
[xyz-ihs snippet=”Responsive-Ad”]