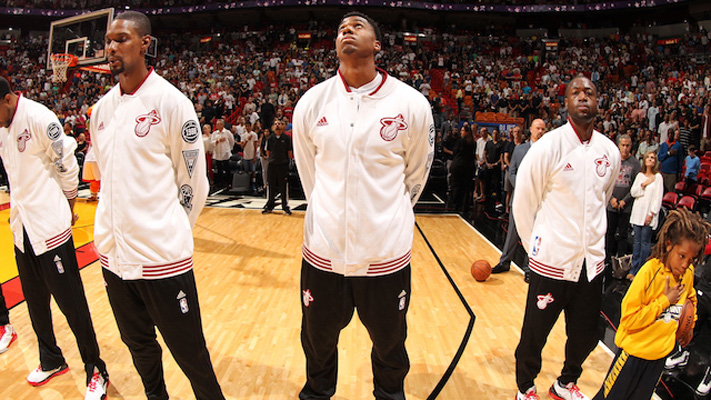 Six games into the 2015-16 NBA season and the Miami Heat hold a .500 record of 3-3. While Miami has shown flashes of brilliance early on, they’ve displayed a number of flaws and inconsistencies as well. Let’s take an in-depth look at what’s working and what’s not for the Heat thus far in this young NBA season.

The Miami Heat currently rank 24th out of 30 NBA teams in points per game. The Heat are receiving steady contributions from Dwyane Wade, who has scored at least 20 PPG (points per game) in five of the first six contests, however, the team needs more consistent scoring from their other playmakers.

Chris Bosh is averaging 15.5 PPG and looks good after missing the second half of the season last year, but that number will likely need to come closer to 20 PPG in order for Miami to contend on a nightly basis. Point guard Goran Dragic has come on as of late (averaging 16 PPG in his last three outings) but is still only averaging 12.5 PPG on the season. He and Bosh must get the pick-and-pop going.

As this starting five begins to groove and becomes more accustomed to each other, those offensive numbers will likely rise. It’s also important to note that Miami’s sixth man and top preseason scorer, Gerald Green, has missed the previous three games for undisclosed reasons. Miami needs his three-point and rim-attacking abilities off the bench to keep an edge on opponents.

According to Hollinger’s NBA team stats, Miami currently ranks ninth in the NBA in defensive efficiency. They’re holding opponents to 92.8 PPG, which ranks fifth in league.

Miami’s best individual defender currently seems to be Justise Winslow, who is already showing NBA-ready grit and talent on that side of the ball. Head coach Erik Spoelstra has had no problem putting him on the more elite NBA scorers, and so far he has done a solid job. He played about as tight as one could play on LeBron James last week in Cleveland and forced him to make contested jumpers.

He also drew a tough assignment Saturday night defending Paul George, who went off for a season high 36 points, but again, many of those came from contested jumpers. In addition, he looked good covering James Harden on November 1st, helping to hold the MVP contender to just 16 points. For point of reference, Harden averages nearly double that on the season (29.7 PPG).

Miami is seeing their hopes for Hassan Whiteside come to fruition. He poses a nightmarish defensive presence for opponents. Through six contests, he looks to be morphing into the dominant big man he’s always had the potential to be. He is averaging 3.7 blocks per game (second in the league behind only DeAndre Jordan) and regularly forcing opponents to adjust their shots. He must continue to fine tune his offensive game but the talent is there.

Miami’s bench has potential to be one of the best in the NBA, but thus far, they are not producing. There are flashes, sure, but no offensive consistency. Winslow looks like a veteran starter, Mario Chalmers is attacking the hoop, and Josh McRoberts may just be the best passing big man in the NBA. In addition, Tyler Johnson is doing a solid job filling in for the absent Gerald Green but this group needs to start gelling, and quick. Miami’s bench currently ranks 23rd in PPG. Rest assured, the production will improve with more minutes together and the the eventual return of Green. It wouldn’t be a bold call to say that this bench will be elite before long.