Miami Heat: Does Michael Beasley Have a Long-Term Future in Miami? 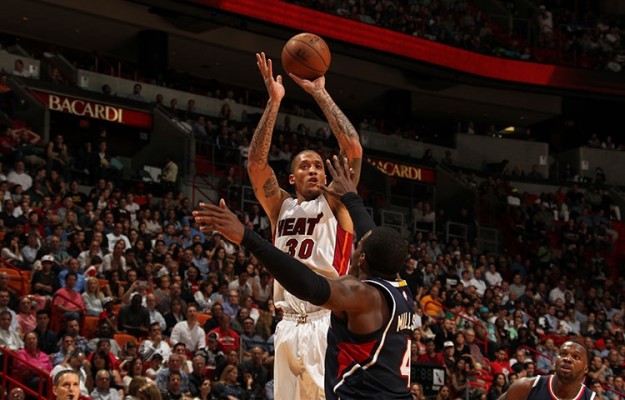 There is just one player in Miami Heat history that has had three different stints with the franchise—that man is none other than Michael Beasley.

While Beasley flashed potential and a smooth offensive game that reminded many of Carmelo Anthony, his statistics still weren’t on par with your typical No. 2 overall pick. Before being traded during the 2010 offseason, the small forward averaged just 14.2 points per game while helping the Heat to two first-round exits in the playoffs.

Meanwhile, his counterpart (Rose) averaged 18.6 points per game in his first two seasons, while leading the Chicago Bulls to two first-round exits as the clear best player on his team. He would go on to win the MVP award during the 2010-11 season.

Fast forward three years after being traded from Miami—after stints with the Phoenix Suns and Minnesota Timberwolves—and Beasley was brought back to South Beach to be a scorer off the bench for a team expected to win a championship during the 2013-14 season.

While he had some moments during his comeback season in Miami, he was left out of the rotation for much of the playoffs. The Heat would allow him to walk as a free agent, where he would then play basketball the next several months in China.

Following the All-Star break and a season-ending injury to Chris Bosh, Pat Riley brought the former No. 2 overall pick back to Miami to provide some scoring punch for a bench desperately lacking such abilities.

The question is, does the veteran small forward have a future in Miami? Or is this just a short-term fix to alleviate the season-ending injuries suffered by Bosh and Josh McRoberts?

First thing is first and that’s this—the Heat have leverage.

Beasley is 26 years old and has already played for four different NBA squads with six different stints with each of those squads. He spent the 2014 pre-season with the Memphis Grizzlies before being waived in October to play in China.

What you see is what you get, and he’s not going to get much better than he is right now. His career scoring average of 13.2 points per game is about what you should expect from the 6’10” forward.

What you’re getting from Beasley is this—a guy capable of creating his own shot, with a silky smooth jumper capable of being converted from mid-range and long-range distances. There is little doubt when pressed, Beasley can be one of a team’s top offensive options.

However, that’s really all you’re getting from the small forward—offense.

Though his defensive abilities are not as dreadful as they once were, he is still a sloppy defender and a lackadaisical rebounder. For his career, he is averaging just 4.9 boards per game.

Does that appeal to the Heat? The idea of a guy who has reached his glass ceiling only capable of pouring buckets, but not capable of playing defense to prevent baskets on the other side of the court?

Beasley is currently on his first 10-day contract. The Heat will have the option of handing him another 10-day contract before being forced to either sign him for the rest of the season, or relinquish him to free agency.

Miami will likely keep the veteran small forward for the rest of the season. The depth of the roster was absolutely decimated in the Goran Dragic trade, which sent rotation players such as Shawne Williams, Danny Granger, Norris Cole and Justin Hamilton packing elsewhere.

The fact that the Heat have two guys in its rotation—Beasley and Henry Walker—who weren’t even playing in the NBA this season before February, is sign enough how desperate Miami is for depth during the last month of the regular season.

Miami will keep its current core together for the remainder of the season as it makes its push for a playoff spot in the postseason.

That’s fine. But what does that mean for next season?

As mentioned earlier, the Heat have leverage in this situation. Beasley has run out of options in the NBA, and his best bet at reviving his professional career is by staying in South Beach.

Even if he plays moderately well during the last month of the regular season, his play won’t wow any suitors into handing him a long-term deal during the offseason. The small forward is playing on a year-to-year basis at the current moment.

Heck, Beasley even recently spoke about his motivation to prove himself, seven years after being selected No. 2 overall by the Heat, via Shandel Richardson of The Sun Sentinel:

“I’m still the same guy, but it’s desperation for me. This is my last chance, my last shot. It’s either play or sit down and I’m not ready to play at the Y, not ready for open gyms. I’m playing to eat right now, and I got kids. It adds that much more….My future, my career could be over in three days”

Here’s the bottom line—how much Beasley performs during this stretch run of the season for the Heat will dictate his future in Miami. Thus far through five games, he is averaging nine points on 41.7 percent shooting from the field. He is already averaging just a shade over 20 minutes per game as a key member of the rotation.

He’s familiar with the system, and he played under coach Erik Spoelstra when he initially became Heat head coach in 2008.

Several things will dictate Beasley’s future in Miami, including who the Heat are able to attract through free agency.

More than likely however, the Heat will, and should bring back their former No. 2 overall pick to Miami next season.

He won’t be signed for much more than the league minimum, he’s familiar with the players and the system and he is no longer burdened with having to prove himself as the No. 2 overall pick.

He may not be the franchise player the Heat envisioned in 2008, but he can still be a key piece of the team’s future.
[xyz-ihs snippet=”Responsive-ImagenText”]