Justise Winslow Ready to Take on Leadership Role in Miami 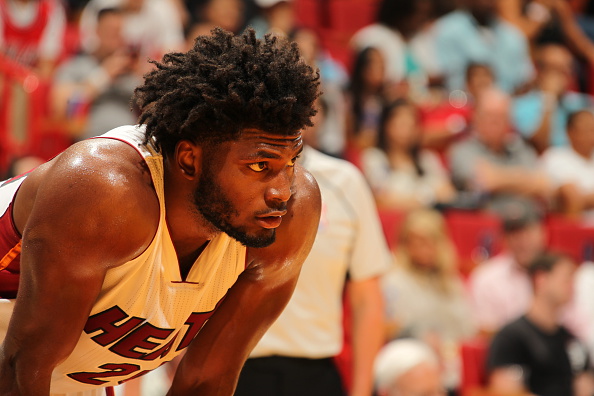 When Justise Winslow was drafted 10th overall by the Miami Heat in 2015, he was considered to be one of the most NBA-ready prospects in recent history. Last season, he proved that by leading the Heat in games played (78 of 82) and showcasing his ability as a tenacious defender that could match up with top-tier NBA talent.

Now entering his sophomore campaign, Winslow is already poised to become one of the primary leaders on the team. After being mentored by the likes of Dwyane Wade, Luol Deng and Heat head coach Erik Spoelstra, Winslow gained invaluable knowledge last season, which will surely transform into on-and-off-the-court wisdom heading into 2016-17.

How can a 20-year-old, second-year player be a true team leader, though? Here’s how:

The Heat have transformed their roster to be nearly unrecognizable from last season, mostly by swapping out aging veterans for youthful prospects. Aside from Chris Bosh, Goran Dragic, Dorell Wright and Udonis Haslem, everyone on the Heat roster right now is under 30 years old. Of those 20-somethings, Winslow is amongst the most experienced players in a Heat uniform along with Hassan Whiteside and Tyler Johnson.

Of all the young guns on Miami’s roster, Winslow has also proven himself in the regular season and the playoffs to a degree that the others haven’t yet. He already knows the system in Miami. He’s built relationships with the coaches that all these fresh, new faces will have to spend months to achieve. Other young players who have not played a regular season game in a Heat uniform can easily turn to Winslow as one of their peers for knowledge and advice.

Leading by Example on the Court

Sure, Winslow struggled with his perimeter shooting last season. His numbers never jumped off the screen at you. However, his potential as an athlete and an elite defender makes him extremely valuable. His potential is the reason the Boston Celtics offered six picks to the Heat in the 2015 draft for Winslow. Furthermore, it’s the reason the Heat declined that offer.

In 2015-16, the former Duke University product did an excellent job of defending some of the biggest names in the game at the small forward position. He throttled superstars like Kevin Durant, Paul George and LeBron James, making it difficult for them to even get the ball, let alone do something with it.

Here’s how Daniel Lewis of Fansided summed up Winslow’s value as a defender :

“Winslow is the type of player that can counter the schemes of opposing offenses. He’s incredibly strong, and couples that with an ability to navigate around screens to stay close to his man. The Heat allowed 5.9 points per 100 possessions more with Winslow off the court than with him on the court, per NBA Stats. His defense helps set up blocks for Hassan Whiteside, steals for Goran Dragic, Tyler Johnson and Josh Richardson, and defensive rebounds for Chris Bosh.”

Just take a look at some of these impressive defensive highlights by Winslow from last season, showcasing his ability to be sturdy, quick and smart all at the same time.

Keep in mind, Winslow’s defense will only improve and expand in his sophomore campaign. Meanwhile, his offensive skills are sure to take shape as he hones his game moving forward.

Earlier this year, coach Spoesltra spoke to Sports Illustrated about the greatness he sees in Winslow:

“Scorers have gone at him but he’s been able to learn and adapt,” Spoelstra said. “If he gets beat on something one time, he puts it into his library not to get beat on that same action another time.”

That’s part of what makes him so special. His mental approach to the game and the NBA lifestyle has people saying that he has “the savvy of a 10-year veteran.” Spoelstra goes on to mention that Winslow has the “emotional stability” to thrive in this league and that that’s what makes him a “standout.”

The six-foot-seven small forward isn’t just another one-and-done hotshot with a chip on his shoulder. He is wise beyond his years and he’s out to prove something to the fans, the league and to his organization. With Wade gone, Winslow feels he has the ability and leadership skills to become a franchise player:

“It’s my turn to make the whole front office feel confident in building around me for the future,” Winslow told Jon Scheyer, Duke’s assistant coach, on The Offseason podcast.

It seems the front office has placed their confidence in Winslow as well. Just ask team president Pat Riley:

“Are we ready for Winslow to start at the three? I am,” Riley told the media last month. “I’m not just throwing him out there, this guy has been thrown out there last year and played significant minutes and significant time. I trust him. So you guys put too much (emphasis) on the things he can’t do versus what he can. And those things he can’t do, he’s going to be able to do better with more minutes.”

The fact is, this kid has impressed nearly every teammate, coach and opposing player he’s come in contact with. More importantly, he clearly wants to learn, grow and evolve and he’s willing to put in the necessary work to do so. All of these things, plus his nearly limitless potential for growth, are what will make Winslow a Heat leader in 2016-17.
[xyz-ihs snippet=”Responsive-ImagenText”]

dwyane wadeerik spoelstraFeaturedJustise WinslowKevin Durantlebron jamesmiami heatNews Tickerpat rileyPaul George
← Previous Story Five Reasons Dion Waiters Can Take the Heat to the Next Level
Next Story → Wayne Ellington: My Jumper Is ‘What’s Going to Separate Me from the Other Guys’