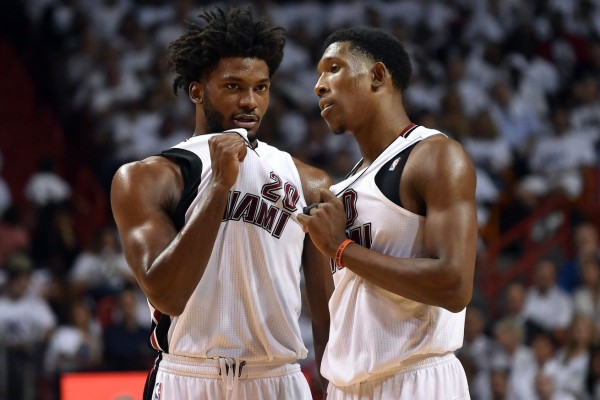 The future is looking really bright in South Florida, and it’s not just because of the summer sun.

The Miami Heat are headed into the offseason with plenty of questions but undeniable upside.

The team will face a fresh new set of challenges when the clock hits July 1st and the free-agency frenzy begins, but for now they can focus on the talent that they groomed all of last season. Specifically, this means honing the skills of Justise Winslow and Josh Richardson.

Last week, Winslow spoke to Ethan Skolnick on his radio show (790 The Ticket) and shared some insight into how he plans on developing his game.

“For me it’s the concentrated group of really talented players … It’ll be fun and competitive” said Winslow.

However, the Duke University product is not the most well-rounded player. He was an immediate shutdown wing defender when he was drafted, but he has a ways to go on the offensive end of the court. His jump shot was streaky at best and non-existent at times last season.

This will be a focus of Winslow’s as he practices during the NBA Summer League and offseason training. He spoke about working on his movement as that would allow him to add moves off the dribble. This would also help him develop an offensive arsenal that wouldn’t just leave him around the perimeter as a poor jump shooter.

He spoke commandingly that this was the summer that was going to make him into a complete player.

“I am confident in my game and that after this summer, I am gonna take a huge leap and really be ready to make a bigger impact next season,” Winslow said.

If anything is clear from the tone of his comments, it’s that Winslow is not a player lacking in confidence. Skolnick noted that the stoic-faced rookie balances the fine line between confidence and cockiness extremely well. Winslow’s response should be music to ears of Heat fans.

“You gotta definitely be confident in your ability, but with me, I’m always surrounding myself with good players. Players that are always pushing me … I’m constantly surrounded by D. Wade (Dwyane Wade) who’s always pushing me to know that there is another level and that I can be better.”

It seems that this 20-year old forward has more foresight than most NBA players well into their careers. Setting himself up with goals of reaching the levels of Wade is ambitious and exactly the mindset the Heat want Winslow to have.

“Eventually, I want to be a franchise guy. I think growing up that’s something I always wanted,” said Winslow.

It’s no secret that Winslow is a great player who is only going to get better.

However, Miami’s best held secret of the season, perhaps even unknowingly, was the caliber of talent they had picked with the 40th pick in last years draft.

“That’s just what keeps the chip on my shoulder. I always know at the back of my mind that there were 39 other guys picked before me,” Josh Richardson said as he reflected on the season.

Richardson broke out of his shell right after the All-Star break when the Heat needed his hot shooting the most. It was his defense that earned him a spot in the rotation, but when he caught fire from behind the arc there were times where Erik Spoelstra wouldn’t dare to take him out.

Richardson has not had the same collegiate successes as his rookie counterpart and was told that he was going to be a player that the Heat would develop over the next couple years. However, due to injuries, Richardson became a crucial part of the team’s stretch run.

It was interesting to note that during the team’s exit interview he was really focused on becoming a better point guard.

“I’ll play in at least one of the summer leagues just to get more point guard reps. And get more comfortable in point guard situations,” said Richardson.

A viable backup to Goran Dragic is definitely a role he could grow into. Alongside Tyler Johnson, the backcourt could become a multifaceted attack next season.

The Heat roster is definitely going to see some changes from last season, but if the core of the team returns they are going to have talented young players backing them up. The combination of Rook 1 and Rook 2 becoming more skilled at their positions is going to make the Heat bench a force to be reckoned with next season.
[xyz-ihs snippet=”Responsive-Ad”]