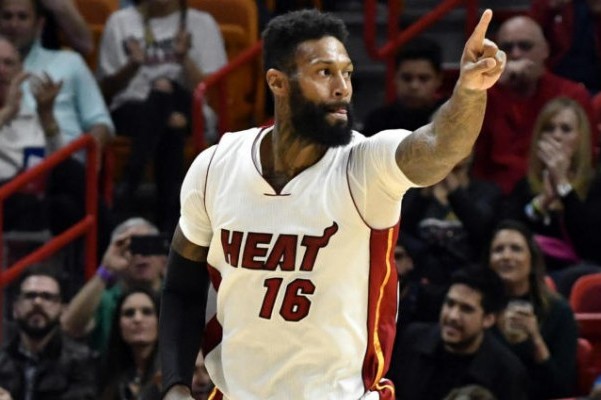 For 30-year-old forward James Johnson, acquired last July via free agency after spending the last two seasons with the Toronto Raptors, his addition to the Miami Heat has been nothing short of a blessing to the organization and its fans.

In mostly a role coming off the bench this season for Miami, Johnson’s positive impact on the court and inside the locker room continues to be outstanding. Although many NBA fans would not consider Johnson to be a household name, he absolutely should draw serious consideration for the 2016-17 Most Improved Player award.

“He made the biggest commitment, and it was to himself,” Heat head coach Erik Spoelstra said of Johnson earlier this week. “To really push himself to be something different, to commit to the work, to his profession, being the best version he could possibly be of himself, and he was very open to our culture and us helping him get to somewhere different.”

According to Manny Navaro of the Miami Herald, no player in the NBA has made as great of an overall statistical improvement from last season to this season as much as Johnson has.

When asked if Johnson is the league’s best candidate for the Most Improved Player award, Heat point guard and teammate Goran Dragic simply had to agree:

“If I’m honest, I didn’t even know he could play like that. Last year, everytime we played against Toronto, he didn’t play. It’s tough to notice a guy who is not playing. I’d never seen him play before,” Dragic said of Johnson. “When he came to this training camp, I said ‘Who is that guy?’ He’s such a dominant force. He can do everything. I mean if somebody asked me I’m surprised they didn’t play him before. But yeah, definitely agree, most improved.”

For coach Spoelstra, he considers Johnson to be an ideal teammate and has the utmost amount of respect for the forward:

“I love his competitive spirit that he brings every single day. JJ is just one of those guys you want to be around,” Spoelstra said. “I’m sure he always was the guy that can get along with anybody at school – the jocks, the nerds and everybody in between. He just makes you feel better about yourself. That’s why he’s such had an impact, not just on the game.”

Johnson, who takes a lot of pride in physical fitness and is also a second-degree black belt, managed to go from 275 to 238 pounds over the offseason.

“If you’ve seen the before and afters, I know they only show you the front part, but my back, they take the before and after, and my back has completely transformed all the way slim,” Johnson said of his weight loss. “Just being able to do more things agility wise. I can move, cut through smaller spaces and definitely give more effort out there in the game. I can go from 100 effort to 150 now.”

Without Johnson’s improvement and impact as an all-around player throughout the season, this Heat team would probably not be in the position they are currently in, following an 11-30 start to the season. His energy on the court, explosive offensive ability and tenacious defense make him a logical choice for this season’s Most Improved Player award.
[xyz-ihs snippet=”Responsive-ImagenText”]