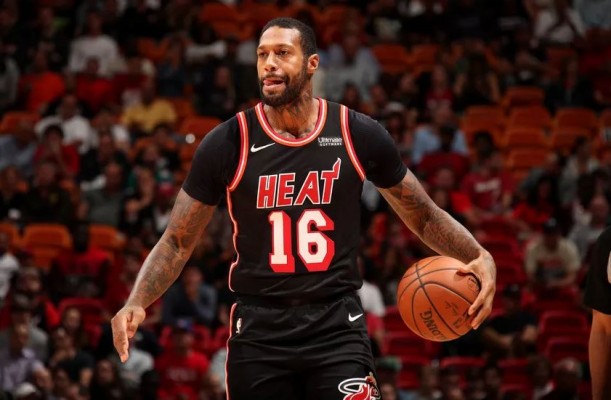 Amidst the Miami Heat‘s recent struggles, head coach Erik Spoelstra decided to make some lineup changes. One of those was moving forward James Johnson back to a bench role. This is the role he flourished in last season, averaging 12.8 points, 4.9 rebounds and 3.6 assists per game, all of which set career-highs. However, this season, playing almost half the Heat’s games as a starter, his play has suffered.

When he is in the starting lineup, Johnson typically has to share the ballhandling duties with Goran Dragic and Josh Richardson. However, when coming off the bench, Johnson is the team’s main ball-handler.

Johnson admitted his struggles and had a positive outlook on the lineup change, evident by what he said to the Miami Herald’s Manny Navarro:

“Just was having bad games previous games. Nobody to blame but myself. But there’s a point in time that you have to look yourself in the mirror and no matter second group, first group, I was playing terrible. I just came with a different energy,” said Johnson. “My team approached me, coaches approached me. It’s all about responding. It’s how you can respond, how you can bounce back. [My team] gave me the truth. Sometimes the truth can set you free and I believe it did.”

In the games Johnson has started this season, he is averaging 9.8 points, 5.1 rebounds and 4.2 assists per game. Those numbers turn to 10.5 points, 4.7 rebounds, and 3.8 assists per game when he comes off the bench. All these stats are similar, but when you look at the percentages, there are alarming differences. Johnson shoots 46.3 percent from the field, 19.6 percent from three and 65.9 percent from the free-throw line as a starter. As a bench player, his percentages increase to 48.7, 38.2, and 72.2, respectively.

His offensive rating is also better off the bench (106.1) compared to as a starter (100.4). Johnson’s bench role as a primary playmaker, something he seems to be more comfortable in, helps a Heat offense that ranks 24th in the league in offensive rating (103.1) and 28th in points per game (100.5).

Johnson is a big part of this team, but the stats make a clear point: He should continue to come off the bench. This change works for both Johnson and the Heat, who will surely need him at his best if they are to make the playoffs.
[xyz-ihs snippet=”HN-300×250-TextnImage”]