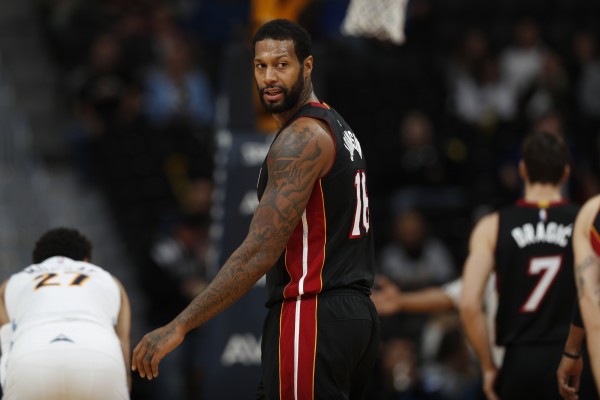 Realistically speaking, when the Miami Heat signed veteran forward James Johnson to a one-year deal worth $4 million in the offseason, few expected the 29-year-old to play a major role on the team.

In his seven years in the NBA before joining the Heat, Johnson had bounced around as a role player for five different teams, including two separate stints with the Toronto Raptors. He holds career averages of 6.7 points and 3.2 rebounds.

Since joining Miami though, the six-foot-nine forward has finally begun to hit his stride. In the 2016-17 season, Johnson is averaging career-highs in both points (10.1) and rebounds (4.7) per game.

Though Johnson has always seen himself as a worthy contributor throughout his career, his numbers with Miami speak volumes about where he’s been able to take his game in these last couple of months.

What Johnson means when he says he’s “fixed” his body thanks to the Heat, is the fact the he’s lost 24 pounds and gotten himself down to just eight percent body fat since joining the team. Evidently, the loss in body fat seems to have a significant correlation to the uptick in production.

“He’s playing his best basketball,” Heat head coach Erik Spoelstra said of Johnson. “I think he’s in the best shape that he’s been, if not in the league, in a long time. He’s a very versatile player. We’ve had success with guys like that over the years where you can play him at a lot of different places on the court to try to expose the opponent’s defense and he really competes defensively. We like guys like that.”

Part of what makes Johnson so valuable to this young Heat team is his ability to do a little bit of everything at a consistent level. He’ll likely never be the type of player whose numbers jump out at you on the stat sheet, but for Miami, he’s quickly become one of those “glue” guys.

Goran Dragic, who is having a career season of his own, recently spoke of Johnson’s value to the Heat:

“He can do everything. He plays with passion. He can play multiple positions, put us in offense, he can score. That’s good to have.”

Perhaps the most valuable aspect of the versatile big man’s game, however, has been his ability to provide lockdown defense in clutch situations. In fact, Johnson is holding the players he’s defending to a team-best 33.5 percent shooting this season.

Overall, the team is simply better when Johnson spends quality minutes on the court. In the seven games that he’s played 30 minutes or more this season, the team has gone 4-3. That marks a pretty significant winning percentage given the fact that those four wins represent half of the teams total victories (the Heat are 8-17) on the year.

It’s clear that Johnson is thriving in Miami, and for a guy whose played for five teams in seven years, it’s certainly a relief to be able to show a team that he can be a valuable member of the roster moving forward.

In fact, Johnson wants nothing more than to make Miami his permanent home. In a recent interview, the Wake Forest University product was asked if he feels he’s found a home in Miami, and his response was rather emphatic:

“Absolutely,” Johnson answered. “I really hope so. I’m working for it and it would be a dream come true to stay here.”

There are a number of factors that have contributed to Johnson’s newfound success in Miami, such as the loss of Chris Bosh before the season, the extra minutes due to the injury to Luke Babbitt, who was the teams opening day starter at the four spot, and the fact that Johnson’s versatility is simply second-to-none as compared to the other power forwards on Miami’s roster.

Regardless of all that though, the fact is that Johnson has been given an opportunity and, thus far, he’s made the most of it. In a game where nothing is ever guaranteed, and roster spots, lineup changes and game plans are ever-shifting, all Johnson can do is seize the opportunity that lies before him, and frankly, that’s exactly what he’s done up to this point.
[xyz-ihs snippet=”Responsive-ImagenText”]