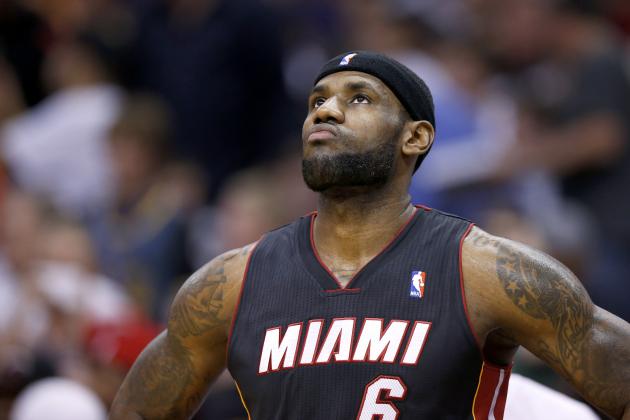 It seems like every team in the NBA is lining up to pitch their vision to LeBron James in his second go at free agency, but the Miami Heat still remain the prohibitive favorite to land the King’s services. Why is Miami the best option for LeBron? I’m glad you asked.

It all seems like a distant memory now, but don’t think that LeBron has forgotten about how tumultuous his first season in Miami was. Between the media firestorm and the overwhelming shift in opinion amongst fans, James knows what leaving a franchise behind in search of a championship can mean for him.

Last season wasn’t exactly a textbook example, but having a unit that already has chemistry and understands what’s expected of them goes a long way toward building a championship contender. Dwyane Wade struggled through injuries and Chris Bosh was relegated to becoming almost exclusively a long-range shooter, but despite these issues, these guys liked each other a lot and they loved playing together. If they didn’t, there never would have been a “Big 3” in the first place.

In addition, by renegotiating their contracts, James, Wade and Bosh allow the Heat the flexibility to be able to add key pieces to a roster that floundered down the stretch last year. There are rumors that James isn’t wiling to take less than a max contract, but even if that report is true, there are ways for Miami to circumvent the cap restrictions. Signing Wade or Bosh to a backloaded multi-year deal will help to keep more money available right now, and James could then sign a shorter deal for the same money as the five or six year max. LeBron would be wise to sign a one year deal with Miami, essentially a trial run for Pat Riley to see what type of roster he can assemble around the King.

If he’s satisfied, James can sign as a free agent again next summer. If not, he can once again hear the pitches from around the league and make his decision on where to play.

Point guard and an interior rim protector top the list of needs for Miami, and I’ve heard names like Pau Gasol and Isaiah Thomas linked to the Heat. The roster is far from finished, but if LeBron wants to avoid the scrutiny and having to start back at square one, the Heat are undoubtedly his best option.

Each year in Miami, there is an expectation that the Heat will win the NBA championship. The players know it, the coaches know it, the front office knows it and even the fans know it.

You think they have a culture like that in Cleveland?

They don’t, and we’ve all heard time and again that the only thing that James is hell bent on in free agency is winning championships. If that’s true, I don’t see how he could leave Miami.

Cleveland, Phoenix and Los Angeles are all at least another year away from being ready to compete for a championship, even in the very best of scenarios. Houston could create another big three so to speak with James, Dwight Howard and James Harden. While the prospect seems intriguing, playing in the western conference drastically diminishes the chances of making the finals year after year as the Heat have been able to do.

Chicago could also look intriguing on paper, but with an injury-prone star like Derrick Rose constantly missing time, it’s hard for me to see that roster winning a championship.

Overall, Miami will offer James the best shot at more titles, and if the biggest factor in his decision will be winning, the Heat remain at the top of the list.

Pat Riley is a living legend, a basketball hero of sorts. Behind Phil Jackson and Greg Popovich, it’s hard to think of a more recognizable basketball mastermind than Pat Riley.

In 2010, Riley was able to pry James away from his hometown Cavaliers with his vision and his masterful work with the Heat roster. This time, the pressure is all on Riley to keep LeBron from moving on once again.

While it’s a tall task to completely revamp a roster in one offseason, it’s not a new concept for Riley and the Heat, and if anyone can pull it off it’s the guys in that front office. In addition, James has built a connection with Riley over the last four years, and I’m not sure if he’d be willing to walk away from Pat and his vision.

Also, the state of disarray that continually plagues the Cavs and their front office would make it extremely hard to leave an organization like the Heat. Pat Riley and Mickey Arison take the cake over David Griffin and Dan Gilbert without a doubt. Sorry Cleveland.

Ever been to Cleveland in the middle of January? I lived there for 18 years and uh… It’s not so nice. Just ask Joakim Noah. Most people act like location and family input have no impact on a basketball decision but they do, these things absolutely matter.

Many people read into Savannah James’ Instagram post when she said she couldn’t wait to get home to Akron, thinking it could be a hint towards LeBron’s way of thinking. What most people don’t know, however, is that Savannah has always loved Akron, and actually stayed at home with the family during LeBron’s first season with the Heat in 2010-11.

I definitely think there’s a part of LeBron that wants to go home and make amends in Cleveland, but the summer of 2014 doesn’t seem like the right time to make the jump. The roster in Cleveland is still extremely raw, and with three first-rounders in next year’s draft, next summer is when I’d be most afraid of losing LeBron’s services if I’m a Heat fan.

Especially after last winter, if would be difficult to say goodbye to the sunny skies of South Beach in favor of the salt and slush of Northeast Ohio. I pick Miami, and am once again forced to apologize to my hometown. Maybe next year Cavs fans, maybe next year.

I anticipate James signing either a one year deal or a two year contract with a player option after year one. This puts James in a position to yet again compete for a championship this season while keeping his options open for the future. It’s all a waiting game at this point, and every basketball fan across America will be biting their nails until we know where the next stop will be for LeBron James.