Heat Nation Feature: Is Chris Bosh Now the No. 1 Option in Miami? 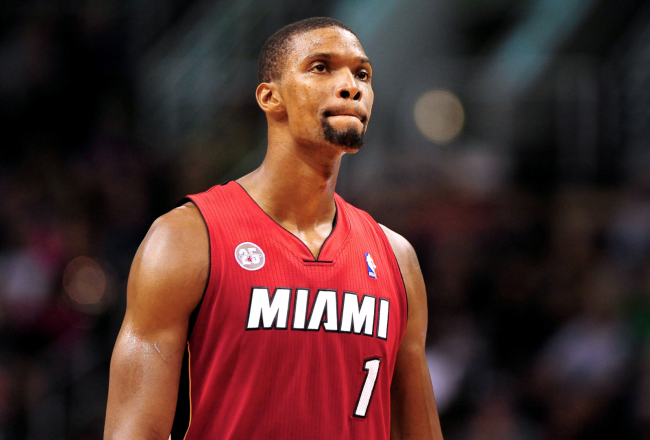 It’s officially been a week since LeBron James announced that he’s taking his talents back to Cleveland. Since that time, the Cleveland Cavaliers went from being a below-average team in the Eastern Conference, to favorites to win the NBA Finals. LeBron’s departure has led people to believe that the Miami Heat are a middle-of-the-pack team without the four-time MVP. What people have not focused on enough is the effect LeBron’s departure will have on the Heat’s Chris Bosh.

Bosh had widely been considered the third wheel in the Heat’s ‘Big Three’ group. LeBron was the clear head honcho, with Dwyane Wade as his trusty sidekick. The guy who was often forgotten was none other than the 6’11” Bosh, who switched between playing power forward and center throughout the four seasons that the ‘Big Three’ were together. Though Bosh was never the ‘go-to’ option while playing alongside both LeBron and Wade, the 11-year NBA veteran was the best player on the Toronto Raptors for a seven-year period from 2003-2010 before signing with the Heat.

While with the Raptors, Bosh established himself as one of the top players in the NBA, and an annual all star, as he led the Raptors to two playoff appearances and a division title. It wasn’t until this past season that the Raptors finally made it back to the playoffs in the absence of Bosh, illustrating just how valuable of a player Chris was to the franchise. The reason LeBron’s departure will have such a pivotal effect on the value of Bosh is because of this reason: it will lead to Bosh becoming the Heat’s No. 1 option.

On the other hand, a player who hasn’t aged as gracefully is the Heat’s other superstar player, Dwyane Wade. Though Wade remains the franchise face of the team, and will go down in South Florida sports history as one of just a few legends, Wade has struggled through a lot of wear-and-tear throughout his career. Last season was the most painful for Wade, as head coach Erik Spoelstra had to limit Wade to just 54 games due to ailing injuries.

It was no surprise that Wade was limited last season. The face of the franchise has always played a bruising style that sees him drive to the hoop with reckless abandon. While the style has been effective for Wade and the Heat over the course of 11 years, it also leaves him vulnerable to injury. Wade will be 33 years of age next January, but he is more bruised up than most soon-to-be 33-year-olds in the NBA.

Without LeBron being the main ball handler and the guy who the offense runs through, there will be much more freedom for both Bosh and Wade. Wade will have the opportunity to once again become the main ball distributor, where he is best suited. Bosh will have more possessions to post up and be utilized in the paint. As LeBron evolved in Miami, he started to post up more. From 2011-12 onward, LeBron became a premier force in the post, making it harder for Bosh to be utilized in the paint, considering how effective of a post player LeBron was.

This isn’t to say that Wade will become a clear No. 2 option to Bosh. Think of Bosh and Wade’s new twosome as more of a 1a and 1b sort of pairing. Wade will still be looked to as the face of the franchise and a guy who the Heat can depend on to knock down big buckets in winning time. However with LeBron elsewhere, Bosh and Wade will now be looking at roughly the same number of shot attempts.

It’s a challenge that Bosh will embrace. One of the reasons Bosh re-signed a max deal with the Heat for five years and $118 million was the opportunity to prove himself without LeBron. Via Tom Haberstroth of ESPN.com, Bosh stated the following in regards to becoming a No. 1 option again:

“I think sometimes you miss it. You wonder if you can still do it and step up to the challenge. I haven’t had to be that guy. I played with the best player in the world. I didn’t have to be the alpha. But now, I get to see if I have it in me, and not many people are going to believe I have what’s necessary. But that’s what makes it exciting.”

Though the Heat may not be as dynamic without LeBron as they were with him, one thing is for certain — the team is still a top contender in the Eastern Conference with Bosh as a number one option.

Next season will give Bosh his first opportunity in South Beach to finally prove that he can still be the man after being considered the third wheel for the past four years.

chris boshdwyane wadeFeaturedlebron jamesmiami heatnew eraNews Ticker
← Previous Story Why The Miami Heat Are Still The Eastern Conference Favorites
Next Story → Was the Re-signing of Mario Chalmers the Right Move?