How the Miami Heat Can Acquire Kawhi Leonard 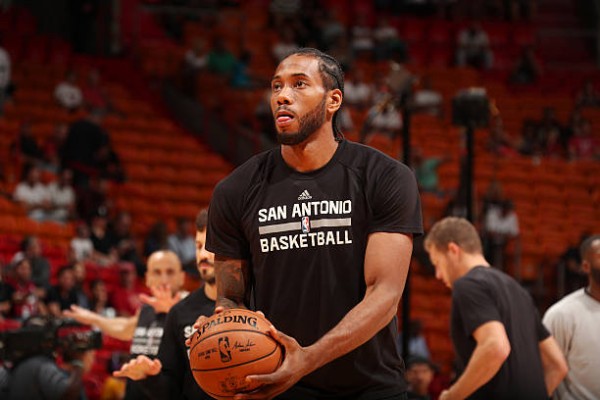 On Friday, news broke that forward Kawhi Leonard wanted to leave the San Antonio Spurs. With only one guaranteed year left on his contract (Leonard holds a player option for the 2019-20 season), the Spurs might be inclined to trade the 26-year-old rather than lose him for nothing in free agency.

ESPN published an article where multiple NBA insiders came up with different trade packages for the two-time All-Star. One of those trades involved the Miami Heat acquiring Leonard. The trade would be as follows: Miami would receive Leonard and Patty Mills while the Spurs would receive Goran Dragic, Josh Richardson, Justise Winslow, and Bam Adebayo.

Besides getting a superstar talent in Leonard, who averaged 25.5 points, 5.8 rebounds and 3.5 assists per game in the 2016-17 season, the Heat would also be acquiring a solid point guard in Mills. The Australian native averaged 10.0 points and 2.8 assists per game last season. For his career, Mills is a 39.0 percent shooter from the three-point line and the Heat could certainly use more quality three-point shooters.

This trade would also save the Heat around $1.4 million in cap space. Although it isn’t that much money, it could help the Heat avoid having to pay the luxury tax.

The one problem with this trade is that it would leave the Heat without a clear starter at point guard. Although Mills started 36 regular-season games for the Spurs last season, he seems to be more suited to being a backup and coming off the bench.

If this trade were to go through the other capable ball-handlers on the team would be Tyler Johnson, Dion Waiters and James Johnson, none of whom are true point guards. The Heat would need to look to other trades to acquire one or sign one during free agency.

As mentioned before, Leonard holds a player option for the 2019-20 season and there is no guarantee that he re-signs with whichever team trades for him. Would Heat president Pat Riley be willing to trade four key contributors of a playoff team for a superstar that might turn out to only be a one-year rental?
[xyz-ihs snippet=”HN-300×250-TextnImage”]