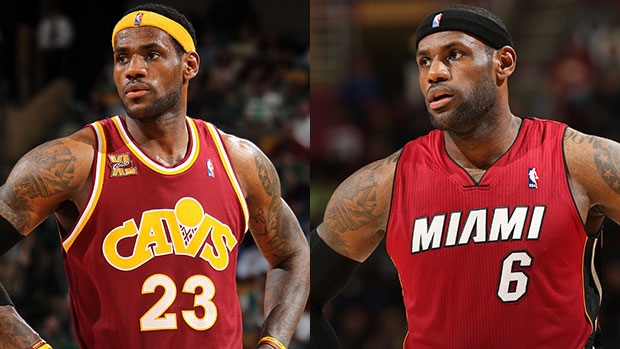 LeBron James and his new-look Cleveland Cavaliers have been the talk of the offseason, but with opening season tipoff looming, expectations will surely mount. After yet another stirring free agency saga that rivaled your mom’s favorite soap opera, LeBron will now be looked upon to put in work, and this time there will be no more excuses. He arrived in Miami back in 2010 with a stacked team, and here in Cleveland, he will have another solid contingent to work alongside with. LeBron stymied title hopes with his announcement letter a little over a month ago, but let’s not kid ourselves—this 2014 Cavs team is really, really good…but is it better-than-the-2010-Miami-Heat good? Let’s break down the starting fives of each and figure it out.

Ok, it’s fair to say LeBron has never played with an elite ‘true’ center, but he’s always had guys that were specialists in one regard or another. Back in 2010, the Heat had defensive specialist and shot-swatter, Joel Anthony. They also had LeBron’s old friend, Zydrunas Ilgauskas. Both were serviceable options, but neither were dynamic scorers on the offensive end. Both Big Z and Joel averaged a combined seven points per game in 2010, and they managed to grab a combined eight rebounds per game as well.

In Cleveland circa 2014, LeBron’s centers are not much better but better nonetheless. Anderson Varejao gives you a near double-double with eight points and nine boards per game. He’s also a very underrated defender, and his ability to draw offensive fouls and hustle are sometimes hard to express with stats. His intangibles alone make him an asset to this team. Brendan Haywood missed all of last season with a broken foot, but prior to that he averaged six points and six rebounds per game.

Neither of these center tandems—either 2010 or present—are worth standing ovations, but a pleasantly surprised golf clap would suffice for Cleveland; just enough to give them the edge. 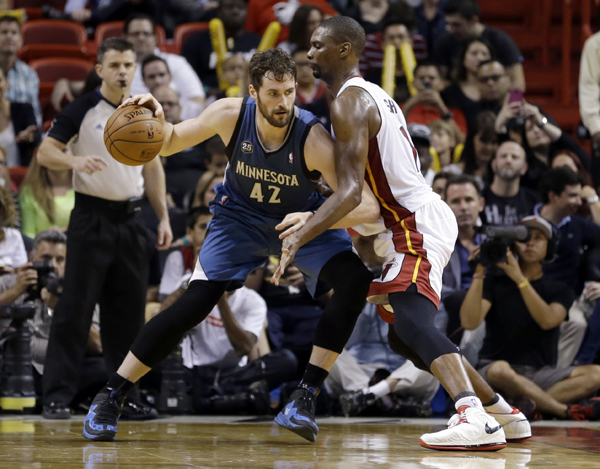 Now here’s where it starts to get interesting. You can debate the metrics all day long with Kevin Love, but you can’t debate the fact the man puts up 19 points and 12 rebounds for his career. He moves off the ball; he has a soft touch around the hoop; he effortlessly flings pinpoint fullcourt outlet passes, and he can shoot from anywhere on the floor. He’s a pretty goodplayer offensively, but defensively, especially in the man-to-man, he’s exploitable. Love apologists will argue his ability to control the defensive glass makes up for his lapses individually, but defense is a bit more than boxing out and controlling possessions. No one knows how Love will play in Cleveland, so at this point, he’s an unknown variable. However, we had a good four seasons of LeBron and Chris Bosh, and that tandem worked out pretty well—considering Love and Bosh do a lot of the same things, expect Love to have success as well.

Bosh in 2010 averaged 18 points and eight boards, but he also flexed a potent midrange game that allowed Miami to steamroll teams with a lethal inside-outside attack plan. He was also a very underrated defender. He was long, and he knew how to draw fouls. He embraced the role of becoming a better helpside defender—something he really showed in later seasons when he was forced to step up and play the 5 position. Statistically, both are virtually identical in the standard categories, but at the end of the day, both provide a lot of the same benefits.

Between the two of them, Love is probably the better pure shooter, but defensively, Bosh has an advantage. Love, like Bosh, will help spread the floor for the Cavaliers offense, and his chemistry with LeBron will mirror that of Bosh-Bron in 2010.

Statistically speaking, LeBron is pretty much the same. His average has routinely hovered around 27-28 points per game with seven assists and seven rebounds. Mentally, however, LeBron has matured in light-years.

In 2010, LeBron looked frightened in the big moments. The mounting pressure of a win-now culture reduced all of his individual greatness to nothing. In the 2010 NBA Finals, the awkward tug-of-war between him and Dwyane Wade had us clamoring for him to step up and yank the reins; we wanted to see LeBron dominate.

It wasn’t until the following year that he finally refined his halfcourt game and overcame his perceived mental meekness in the eyes of the public. Now, in 2014, LeBron is in the prime of his career. Offensively, he’s probably as good as he’ll ever be—which is pretty good.

He will be the dynamo that drives this team every single night, and no matter how good his teammates play, it will ultimately be up to him to lead the charge if they’re to have a chance at a title.

Considering LeBron earned his titles post-2010, and as he continues to grow as a leader and as a man, there’s no question that 2014 LeBron is the better LeBron. 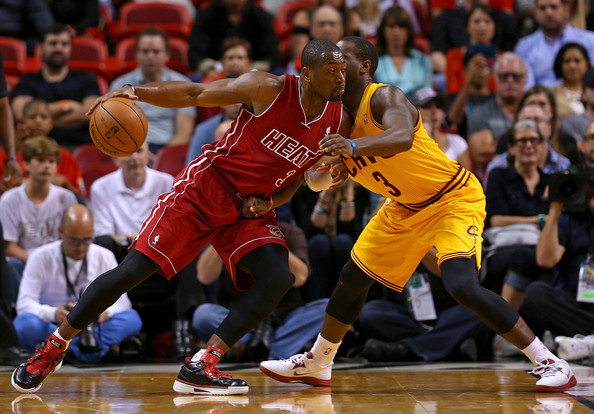 Dwyane Wade in 2010 was the last sighting of ‘prime’ Dwyane. His jumper was still effective, he still had considerable lift, and he wasn’t completely unreliable as far as health goes. Post-2010, Dwyane was still an elite level talent, but he wasn’t in quite the same stratosphere ever since LeBron reduced his role to the right hand man that faithful year of his arrival.

Dion Waiters is still a bit of a question mark. He’s a very ball dominant player, and he does a lot of his damage from the perimeter and off the dribble. He averaged 16 points with three points and three rebounds last season, but he’s going to have to learn how to play without the ball in his hands from here on out. Luckily, he’s getting the opportunity to play with arguably the best set-up man in basketball, and his efficiency will likely increase.

Many questioned how LeBron and Dwyane would ever be able to play together, and although there were growing pains, they eventually became the most destructive duo in pro-basketball—perhaps the same dynamic will happen with Dion Waiters.

Waiters has a lot of upside, but you can’t pick him against a prime Dwyane Wade. You just can’t. 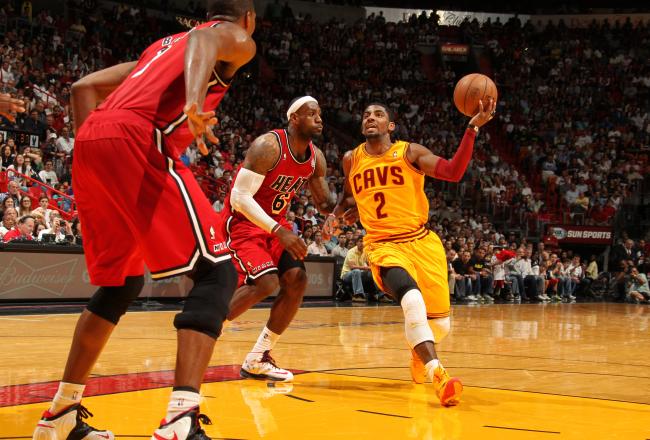 When LeBron arrived in 2010, ‘Rio was already a solid defender, good outside shooter, and he was a capable passer. There was nothing flashy about his game, but he always hit big shots and was a reliable role player. Considering LeBron had the ball in his hands most of the time, Mario just had to stand out by the three-point line and make open shots when he caught the ball. After an atrocious NBA Finals performance this past June, many speculated Chalmers might’ve played his way out of Miami. Fast-forward to August, and he’s still here, but it remains to be seen if he has a solid season in him.

Kyrie Irving might be the best player most have never seen play. Considering he played on a horrifically bad Cavs teams that never got air-time on national television, unless you live in Cleveland or watch pirated internet streams from Bulgaira, it’s a safe bet you’ve yet to see Irving play in a contest that wasn’t during All-Star Weekend. Kyrie might have the best handles in the league, and he’s a great individual scorer. He struggles to stay healthy and he’s a liability on defense, however.

Depth-wise, these teams are mirrors of each other, but the 2010 Miami Heat had more veterans, and the 2014 Cleveland Cavaliers have a bit more unproven youngsters. On paper, both are formidable squads, but we have the advantage of knowing what happened to Miami in hindsight. The Cavs are certainly an unproven commodity, but it’s safe to say that they’re the favorites to win the East—unproven or not. If you value the proven superstars of 2010 Miami’s ‘Big Three’, take Miami. If you like very talented youngsters around a proven two-time champion, take the 2014 Cleveland Cavaliers. When deciding which team is better, despite the pros and cons of both teams, it’s simply too close to call.

cavscleveland cavaliersheatmiami heatNews Ticker
← Previous Story Will the Cavs and Heat be a Top Rivalry for Years to Come?
Next Story → How Accurate are the 2014-2015 Projections for the Miami Heat?