Hassan Whiteside Reveals Why He Ultimately Signed With Miami Heat 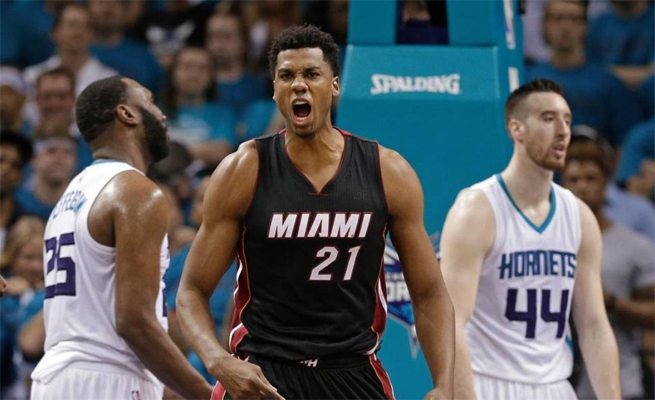 What did Hassan Whiteside do once he signed his $98 million contract two weeks ago? He went to the zoo.

If you follow Whiteside on Snapchat, you might’ve have seen his excursion to the zoo in New York the day after he decided to re-sign with the Miami Heat.

However, his decision between Dallas and Miami was not an easy one. After meetings with both teams concluded around 3 a.m on July 1st, Whiteside was left to ponder his options.

“I never thought I would be talking to them guys in the middle of the night, sitting in a meeting room. It was really something special,” recalled Whiteside.

The Miami entourage that flew up to New York included Erik Spoelstra, Pat Riley, Andy Elisburg, and Alonzo Mourning. At the end of the day, Whiteside seemed more “comfortable” staying with the team that had given him a chance to become a star in the NBA. That was more valuable than anything that Mark Cuban was offering.

“It was two great organizations, and just talking to both of them and them telling me what they had to offer — it was a close decision, but I decided to stay with the Heat,” Whiteside said during the Heat’s summer league game Thursday. “I just felt more comfortable here. I didn’t want to really change teams. I really felt comfortable.”

He did note that the Heat sold him on the how important “family” and “winning” was to have a successful career in the league. Of course, this was before the Dwyane Wade negotiations began, so there was no reason to doubt that the Heat would field a contending team next year.

Whiteside said he was “disappointed” when Wade announced the decision to go back home, but stated that as long as he’s happy and knows that dinner’s on the former Finals MVP when the big man visits Chicago, he didn’t have a problem with the decision.

A new era of Miami basketball is set to begin with Whiteside and Goran Dragic at the helm — and there is no shortage of doubters. When an unproven player like Whiteside signs a big contract, the spotlight on his play the following season magnifies tenfold. There are analysts that still think that the 7-footer is set to have a disappointing season.

“People are always going to try to look for negatives out of any situation,” said Whiteside. “I’ll never let people say, ‘I told you so about this kid.’ I’ve always been the type to try to prove people wrong. It drives me. I really don’t see this as the end of my journey. I just see it as a stepping-stone to even get better. I can take that next step — better training, better chefs, better diet. I really feel like it can help me out even more.”

Undoubtedly, the Heat will expect the 7-foot big man to improve this offseason. He already seems to be close to the young core of this team, including Justise Winslow, Josh Richardson, and Tyler Johnson. They were working out together as the Las Vegas Summer League came to a close this week.

Miami's young bloods getting down in Vegas. pic.twitter.com/jNBGu3u5kW

But the most important connection the Heat are hoping strengthens this offseason, is the one between Whiteside and Dragic. With Wade gone, Whiteside will need to rely on Dragic a lot more on the offensive end of the court.

“He’s easy to talk to and he’s a really good point guard,” he said. “As the season went on, me and Goran understood each other better. Next year’s gonna be even bigger. It’s gonna be more of me and Goran communicating on that basketball level and getting to know each other even better.”

This upcoming season is going to be an uphill challenge for Whiteside. He is starting to realize that the “haters” don’t ever go away when you make it in the NBA — they just get louder. He won’t have the veteran leadership of Wade, which means he’ll have to become a more vocal influence in the locker room and on the court. We know that Whiteside feels comfortable with the Heat, so now it’s time for him to perform on that $98 million level.
[xyz-ihs snippet=”Responsive-ImagenText”]