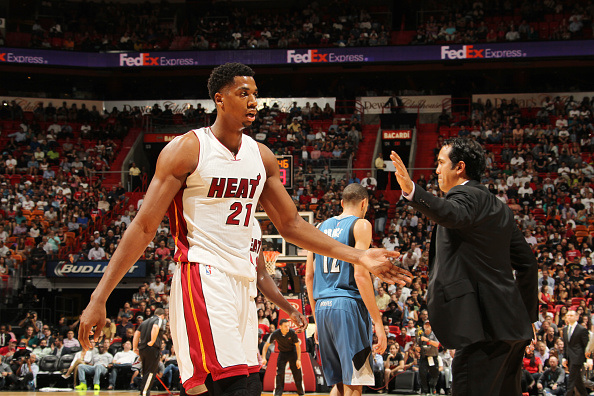 So rarely does an athletic 7-footer slip through the cracks that it almost seems like a Miami miracle that Hassan Whiteside ended up in the hands of the Miami Heat. At 26 years young, Whiteside is on pace to make shot-blocking history in ways that NBA fans haven’t witnessed in 25 years.

He’s already tallied a staggering 58 blocks this year — in a very distant second is Serge Ibaka with 32, but Ibaka plays roughly five more minutes per game. Whiteside has a legitmate chance of cracking 370 blocks this season, a feat that has not been accomplished since the great Hakeem Olajuwon in 1989-90.

While Whiteside is enjoying early success with the Heat, his journey to NBA-elite status has been far from conventional.

After a single season at Marshall University, where he led the nation in blocked shots with 182 (a national record for a freshmen in his first season), Whiteside declared for the 2010 NBA Draft. He was a second-round pick by the Sacramento Kings, but hardly received any playing time.

He was then delegated to a number of D-League roles with the Reno Bighorns, Rio Grande Valley Vipers, and the Heat’s own Sioux Fall Skyforce. The 7-footer then took his talents to Lebanon and China to try his hands at the overseas game. Eventually he wound up back in the states, re-joining the Skyforce in 2014.

It didn’t take long for Pat Riley to realize that this kid was special.

Miami needed help shoring up some of their deficiencies at the center position and it did not take long for Whiteside to make an impact. In 48 games for the Heat, Whiteside averaged 11.8 PPG, 10.0 RPG, and 2.6 BPG. He only started 32 of those 48 contests and finished the season ranked sixth overall in PER.

Now in his first NBA season as a full-fledged starter, Whiteside is putting the entire league on notice. He is currently averaging 14.8 PPG, 11.1 RPG, and a league-leading 4.8 BPG.

“You’ll become a great shot blocker when you’re not scared to get dunked on,” Whiteside recently told the Palm Beach Post. “You go after more shots. It happens all the time that guys back off, but I try to meet everybody at the rim. The day you decide you don’t care about getting dunked on, your shot blocking goes to a different level.”

Aside from emphatically swatting the ball into the stands on a nightly basis, the most impressive aspect of Whiteside’s game may be his ability to alter opponent’s shots. Even when he doesn’t make contact with the ball, opposing players are constantly aware of his imposing presence, which tends to affect their game and overall confidence.

But let’s be honest, the blocks are more fun to watch.

Whiteside had this to say after his 22 point, 15 rebound, 10 block triple-double against Minnesota earlier this week:

“I really wanted to let them know you’re not gonna just come in this paint without meeting me,” Whiteside told Ethan J. Skolnick of Bleacher Report

The scary thing about Whiteside is that he’s only just beginning to hone his game. Keep in mind, this is only his first full season as a starter. So what does the future hold for the talented big man?

“What’s this, my 73rd game in the NBA?” Whiteside said in a postgame presser Tuesday night (it was actually his 77th game). “I ain’t fully completed a season yet. So I’m still learning.”

A poor free-throw percentage is the one negative that stands out. Last season, Whitside averaged a bottom-feeding 50% from the line. Thus far in 2015-16, that number has increased, however, only by 4%, but the center insists that he’s working on this aspect of his game. His poor shooting from the charity stripe was part of the reason Minnesota elected to go with the “Hack-A-Whiteside” strategy late in the fourth quarter of Tuesday night’s loss.

Whiteside, however, was not discouraged.

“This ain’t the first time I faced something that didn’t go my way, obviously,” Whiteside said. “I’m gonna stay positive like I always do. I’m not a perfect basketball player. It’s not the end of the world.”

Another area of improvement for Whiteside to work on is staying out of foul trouble. This season, he has cut his foul rate down from 4.1 to 2.5 fouls per 36 minutes. Clean blocks instead of hard fouls help keep him on the court, which gives the Heat a better chance to compete.

“We want him on the court at all times,” Dwyane Wade told the media earlier this week.

As we continue to witness the evolution of Hassan Whiteside, we are reminded that there are few things more valuable in today’s NBA than a quality big man. Unfortunately for the Heat, that value is turning heads around the league as Whiteside enters free-agency at the end of the 2015-16 season.

The 7-footer is widely considered to become a max contract player for the 2016-17 season, which will make it tough for the Heat to re-sign him if Riley still wishes to entertain the idea of signing Kevin Durant. If anyone can make the numbers work, though, it’s Riley and Andy Elisburg. Until the free-agency frenzy begins next summer, Heat fans are more than happy to live in the moment and continue to witness the wonder that is Hassan Whiteside.
[xyz-ihs snippet=”Responsive-Ad”]