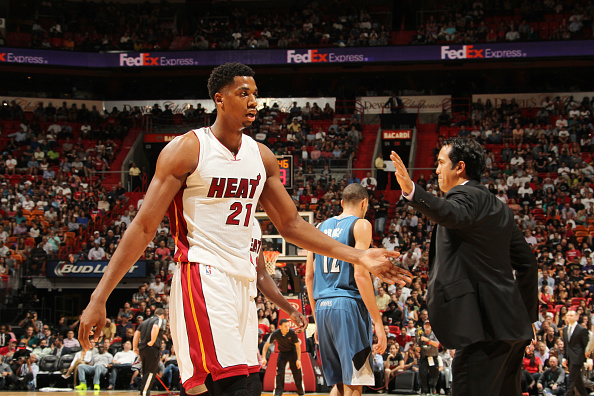 Since arriving in 2014, Miami Heat center Hassan Whiteside‘s playing time has fluctuated because of nagging inconsistencies that’s led to questions about his motivation and defensive skills. However, after weeks of seeing less court time, Whiteside has averaged 33 minutes per contest in the team’s two close games since returning from the All-Star break. Before, that number was just 25 minutes.

Barry Jackson of the Miami Herald writes that communication between Whiteside and Heat head coach Erik Spoelstra during the break has helped establish a new understanding:

“Our communication, me and Spo, is better,” Whiteside said. “When I make a mistake, he’s not yanking me as fast. He’s letting me play through mistakes rather than taking me out so early.”

The conflict between the two sides stemmed largely from Whiteside’s belief that his statistics warranted an increase in playing time. Yet Spoelstra had been blunt when he dismissed his player’s remarks six weeks ago by saying:

“I actually don’t care about his double-doubles at all. It has nothing to do with that.”

Despite the passage of time, Spoelstra remained steadfast on Wednesday in trying to reinforce that Whiteside’s numbers aren’t what ultimately determines how much court time he sees:

“It’s never about the boxscore,” Spoelstra said. “I don’t want him to ever get confused about that. I know it’s easy to in today’s day and age. But it’s about his activity level, his energy. His ability to sustain both those things and his commitment to make winning plays. And he’s been very good since the break.”

That message appears to have gotten through to Whiteside:

Dwyane Wade‘s return to the Heat has afforded him the opportunity to reflect on how the Whiteside-Spoelstra relationship has evolved:

“The good thing about [Whiteside] is his and coach’s relationship is in a better place where they can both understand that they both want the same thing and he’s not feeling like coach is just on him all the time.

“When Hassan plays with that passion and grit and that anger, he’s special. I definitely saw that before I left [for Chicago]. There are not many bigs like that. He’s special. Sometimes that specialness has to go into other things on the court [besides] just being big. And that’s what coach is on him about. I thought [Tuesday] night, once he got into the game, he did a hell of a job and was a big key in us winning this game.”

The Heat will host the Los Angeles Lakers on Thursday night.
[xyz-ihs snippet=”HN-300×250-TextnImage”]