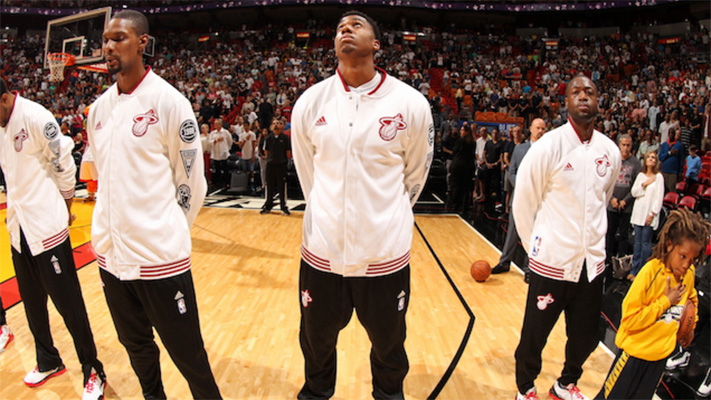 From a standings viewpoint, one could argue that the Miami Heat are already a championship-contending team.

Looking at the Eastern Conference standings entering Saturday’s games, the Heat have the fifth-best record in the conference. It’s a little bit misleading though, because Miami remains just three games behind the best team in the East, the Cleveland Cavaliers. The second-best team—the Toronto Raptors—are ahead of the Heat by just one-and-a-half games.

However, the standings are two-fold. While the Heat aren’t far behind the best of the East, they aren’t far ahead of the middle-of-the-pack either. The Boston Celtics, the eighth-best team in the East, are just a game behind Miami.

From an overall NBA standings point of view, the Heat have the ninth-best record at the moment.

Up until a recent stretch of losses which saw Miami fall to the Brooklyn Nets and the Memphis Grizzlies, the Heat had the second-best record in the conference, and according to ESPN were considered the sixth-best team in the NBA.

Let’s not sugarcoat it, the Heat are a mystery team. You really don’t know what you’re getting from them. While Miami has defeated powerhouse teams such as the Oklahoma City Thunder and the Atlanta Hawks, they have faltered versus teams such as the Nets and the struggling Washington Wizards.

Following their 106-82 victory over a strong Dallas Mavericks team with a flu-ridden Dwyane Wade coming off of the bench, the question begs, are the Heat really an elite team?

Here are five reasons why Miami is not yet an elite team: On Friday night, Miami dominated a top-five Western Conference team in the Mavericks with Wade playing just 18 minutes due to flu-like symptoms. Hassan Whiteside had perhaps his most impressive offensive performance of the season in leading the Heat with 25 points on 12-of-16 shooting with 19 rebounds.

Miami, who is known for their defensive identity rather than their offensive prowess, held Mavericks legend Dirk Nowitzki to just 11 points on 4-of-14 from the field. Dallas was so bad offensively, that Wesley Matthews led the team with just 12 points.

However, the Heat recently lost two games earlier in the week to a team that has the third-worst record in the NBA, and another team who looks destined for a first-round exit in the Grizzlies.

If you want to be an elite team in the NBA, you can’t be losing to lower-tier Eastern Conference teams.

Next: Lack of Signature Victories