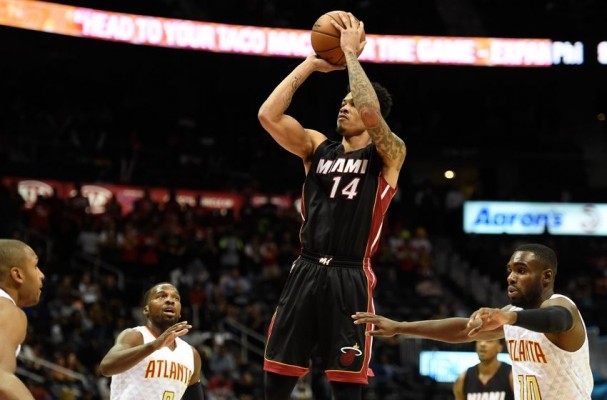 The Miami Heat defeated the Atlanta Hawks, 91-82, for their third preseason win of the season on Sunday night.

More importantly however, Gerald Green continued his hot streak of scoring by posting 19 points on 6-of-13 from the field and 3-of-8 from beyond the arc. It was his fifth consecutive game in double digits scoring, as he’s averaging 15.0 points per game this preseason to lead the club.

Head coach Erik Spoelstra had nothing but positive things to say about Green’s scoring outburst following the victory:

“He’s ignitable. We need some of those types of guys. He can put points on the board in a hurry.”

The high-scoring guard says that his transition to Miami has been painless, as he prepares to play for his seventh team in nine seasons:

The Heat’s bench was given an opportunity to play extended minutes, as the starters—with the exception of Chris Andersen—sat out the entire second half.

The bench scored 68 total points, with James Ennis scoring 19 points in just 24 minutes of action. All of his points were scored in the second half.

Spoelstra took the time to compliment Ennis following the game:

“You like to see young players have to show some grit, some toughness and fight for it and that’s what he’s doing now. Throughout training camp he’s been concentrating on the little things, the intangibles, the hustle plays. Tonight he was able to put some points on the board that probably gives him some validation for all that work.”

Other than Whiteside, Spoelstra also sat Udonis Haslem and Justise Winslow. Haslem needed four stitches under his left eye after Saturday’s game, while Winslow did not play due to “rehabilitative recovery.”

The Heat will have a few days off before taking on the Washington Wizards at American Airlines Arena on Wednesday night at 8 PM EST. The game will be broadcast nationally on ESPN.
[xyz-ihs snippet=”Responsive-Ad”]