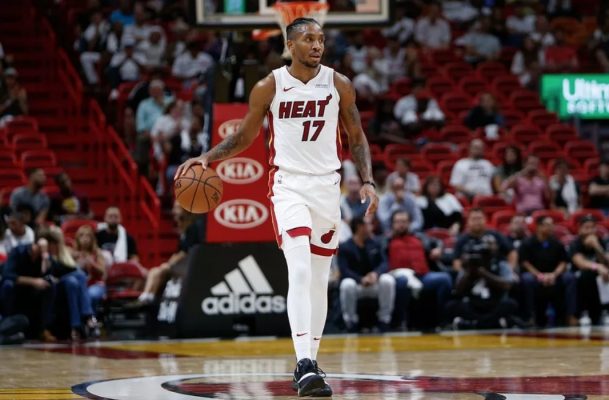 Rodney McGruder has been receiving a heap of attention around the league lately.

At the age of 27, many undrafted players are far off the radar by now. Some have probably followed the norm of taking assistant jobs for the college or high school they attended just to make ends meet.

Yet for the Miami Heat‘s McGruder, who’s currently on a scoring spree averaging 16.0 points along with 7.4 rebounds a game, the timeline for opportunity and luck may be at its finest.

McGruder finished the first game of the season against the Orlando Magic with only eight points as he shot 2-of-9 from the field, a contradiction to what would ensue in the next games. McGruder responded in the following contest against the Washington Wizards putting up a season-high 20 points as his marksmanship improved to 7-of-12 from the field while also knocking down 43 percent of his 3-pointers.

Yet his true emergence didn’t come until the Charlotte Hornets visited American Airlines Arena on Oct. 20.

The Heat’s starters were drowned in foul trouble, forcing head coach Erik Spoelstra to lean on the shooting guard for a career-high 42 minutes. McGruder responded to the minutes overload, as he recorded his first career double-double, tallying 19 points and 10 rebounds in a down-to-the-wire battle with Hornets All-Star Kemba Walker. The effort resulted in a loss, but received major recognition from his coach and teammates alike.

??? to @RodneyMcGruder on posting his first career @NBA double-double!

McGruder dropped 19 points and 10 rebounds for the @MiamiHEAT on 7-of-11 shooting from the field ??#GLeagueAlum @maineredclaws ➡️ @SFSkyforce ➡️ @MiamiHEAT pic.twitter.com/T1BnMyVC2L

“I thought he just did a great job there at the end against a perennial All-Star. To have the game end like that, it’s unfortunate,” said Spoelstra postgame following the loss. “He always has been a winner. Now he’s becoming a very skilled basketball player and he can hurt you in a lot of different ways, and he did that tonight. He was tracking down rebounds, tracking down loose balls, hitting threes, making plays off the dribble. He’s improved in all of those areas, and he’ll continue to improve. He’ll look much different three or four months from now.”

“He’s kind of the ideal player for the Miami Heat,” echoed veteran shooting guard Dwyane Wade. “The guy doesn’t say much. He works hard on both ends of the floor and everyone loves him here. To go out there and have the start of the season he’s having, you’re just happy for somebody like that. We need him with so many guys down and he’s stepping up.”

Before this season, McGruder had been seen as a bench filler with capabilities to provide a spark in certain games. He went undrafted in 2013, thus beginning his everlasting road trip of auditioning for various Summer League teams before opting to sign overseas in Hungary for the 2013-14 season.

However the Heat gave him his big break after signing him to a three-year, partially guaranteed contract in the summer of 2016.

He’s eligible for an extension as of July this year, and though its still early in the season, the Heat may want to monitor his situation carefully. If McGruder’s numbers continue to trend upward or remain stable, they could find themselves at the negotiation table to lock in what could become a sought-after guard in the summer of 2019.

The Heat can extend him the qualifying offer of $1.9 million, though it may not play out in the front office’s favor as other teams will surely do their best in trying to outbid it.

For a lack-thereof-deemed player that found himself bouncing from one team to another, McGruder has finally found his groove in the NBA.
[xyz-ihs snippet=”HN-300×250-TextnImage”]