Dwyane Wade Having Resurgent Season Despite Team’s Lack Of Success 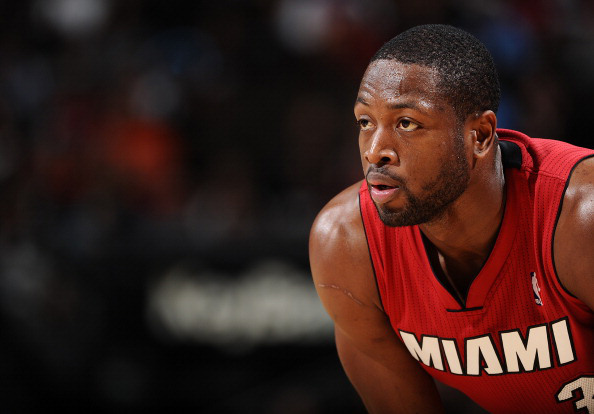 When you take a look at the Miami Heat‘s record, one word should pop out to you—disappointing.

The Heat are just 12-15 and eight games behind the division-leading Washington Wizards just 27 games into the season. Injuries have been the biggest reason for the Heat’s demise, as numerous starters and key rotation players have been shelved for stretches at a time since the season began.

Josh McRoberts is likely out for the season due to a knee injury that requires surgery. Chris Bosh is out indefinitely because of a calf strain. Players such as Norris Cole, Chris Andersen, Justin Hamilton, Udonis Haslem, Luol Deng and Danny Granger have also been sidelined because of their ailments.

With the exception of James Ennis and Mario Chalmers, just about every key player on the Heat roster has sat out games for one reason or another. The Heat have used 12 different starting lineups through 27 games.

One such player who has knows all about struggling through injuries has been none other than Dwyane Wade.

As has been the case over recent years, the 32-year-old shooting guard was hampered by a hamstring injury for seven games during the month of November. During that stretch, the Heat went 3-4, after starting out the season 5-3.

While at the beginning of the season Bosh had established himself as the team’s No. 1 option, D3 has made the case that he is still the Heat’s go-to option since returning from that injury on November 30 versus the New York Knicks.

In the 12 games since his return, Wade has averaged 24.8 points on 51 percent shooting. He is coming off a 42-point performance in a 105-87 loss to the Utah Jazz in which he shot 63 percent and went to the free-throw line 21 times. It was the most points the 11-year veteran had scored in a game since posting 45 points on December 29, 2010 versus the Houston Rockets.

Wade didn’t have an explanation for the Heat’s loss to the second-worst team in the Western Conference, despite his superb performance:

“I don’t have an explanation. It is just disappointing. Tonight, we just didn’t play aggressive enough, we just let them flow into the game and they hit so many shots early. We wasted so much energy just trying to get back into the game. We just didn’t have enough to get over the hump.”

With the recent loss to Washington, the team has dropped eight of their past nine home games. Outside of a home victory over the Charlotte Hornets on November 23, the team hasn’t won a home contest since defeating the Minnesota Timberwolves 102-92 on November 8. Despite having the third-best road record in the league at 8-6, Miami is just 4-9 at American Airlines Arena.

D3 cites effort as an issue for the Heat at this point of the season:

“We don’t have as much as other guys. We are depleted. We could put a better effort out. I can’t say that we are going to win every game or that we are more talented than every team we are playing, but our effort can be there. I thought tonight that after getting a good win on the road and then coming back with this kind of effort as a group is just unacceptable for us. That is our problem. We have to fix that.”

Despite the team’s lack of cohesion on the court, Wade is having a resurgent season after a 2013-14 campaign which saw him limited to just 54 games. Erik Spoelstra intentionally sat out Wade on back-to-back sets last year to preserve him for the postseason.

That has not been the case so this season. In the latter game of those sets, Wade is averaging 22.7 points per contest. That is in line with his season scoring average of 22.8 points per game.

“Save for the illness, his legs feel good. He’s been putting in a lot of work. It’s encouraging for us to see that he’s able to play a back-to-back like that. We just collectively have to play better.”

Despite having a lot of wear-and-tear on his body over the course of 12 seasons in the NBA, Wade is 12th in the league in free-throw attempts with 6.4 a game. It represents the most times he’s gone to the line since the 2010-11 season when he went to the charity stripe 8.6 times on average.

After a game in which he went to the free-throw line 21 times versus Utah, Wade stated that his aggression was key:

“Being aggressive like that was a positive for me. I will take that. But as a team, we just have to be better man. It’s hard when you lose even when you have a good individual performance. The way we lost, I’m not used to that. Not at home.”

While the goal for Spoelstra remains winning games, it’s refreshing to see that Wade is still capable of being the guy who led the Heat to their first championship all the way back in 2006.

The team is struggling to have a winning product on the court, but their star player is back in form. If the Heat are to get back on the winning track, they will need Wade to play like the old “Flash” for an entire season. Through one-fourth of the season thus far, ‘Flash’ has given confidence to Heat Nation that he can be that guy for a full year again.