Don't Miss
Home / Editorials / Do the Miami Heat Have Enough to Make the Playoffs Next Season?

Do the Miami Heat Have Enough to Make the Playoffs Next Season? 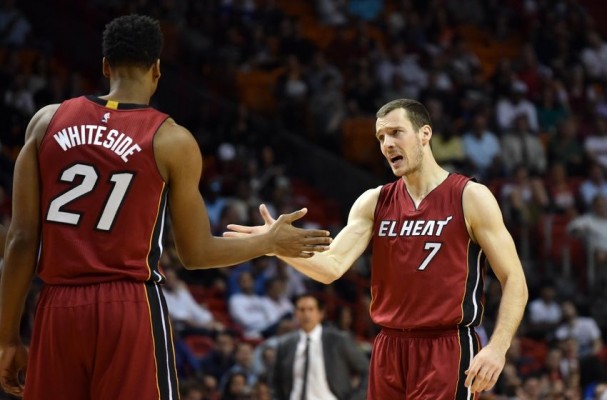 No matter how you put it, the Miami Heat’s 2015-2016 offseason was a sad story. Headlined by the departure of the face of the franchise, Dwyane Wade, to the unsuccessful pursuit of Kevin Durant, to the loss of Luol Deng, there just wasn’t much to smile about after seeing the team disperse and not recoup with big stars.

However, if there’s one person who isn’t worried, it’s Heat president Pat Riley, the man responsible for how the team’s offseason shaped out. A few weeks ago, the former coach spoke with the media of the Heat’s chances of making the playoffs, per The Palm Beach Post:

“So I don’t think there’s any doubt that we can compete for a playoff spot. From that standpoint, you have to figure out and see who in the East really has what it takes to be competitive. It takes 20 or 30 games to get it figured out where you are. Our plan is yes. Our plan is to always compete for a playoff spot, and I think we can do that. I don’t think there’s any doubt we can do that.”

The confident Riley could be saying all this to lighten up the mood in South Florida, but he has always been known for wanting to compete. Despite the Heat losing three of their core rotational postseason players — Wade, Deng and Joe Johnson — they still appear to hold enough to make a run at the playoffs next season.

The Cleveland Cavaliers, Boston Celtics, Indiana Pacers, and Toronto Raptors appear to be the four locks in the Eastern Conference. Behind them are a few solid teams in the Detroit Pistons, Charlotte Hornets, New York Knicks, Atlanta Hawks, Washington Wizards, Orlando Magic and Chicago Bulls.

Somewhere in that mix are the Heat. Miami may not have a ton of seasoned veterans but they have a bunch of motivated players. Nonetheless, the team has already been considered a non-playoff team due to their youth and star power.

It’s given the team motivation to prove people wrong. A young cast composed of Hassan Whiteside, Justise Winslow, Josh Richardson and Tyler Johnson has already started working out together.

The pair of 2015 draft picks, Winslow and Richardson, showed tons of promise last season. Although the sophomores have to improve their offensive games, they’re already so far ahead of their draft class because of the immense playoff exposure from their first season in the league.

Whiteside, fresh off a four-year, $98-million deal, has garnered plenty of criticism after the Heat signed him to that vast contract. Questions and concerns have arisen about the troubled center’s leadership, stability and lack of offensive skill set. Nervertheless, the league’s top shot-blocker has been an underdog in almost every facet of his life thus far and has responded positively. He’s ready for a bigger role next season and to show the haters that he deserves every penny of his lucrative contract.

The Heat also signed a bevy of players on short-term deals. The list includes Derrick Williams, Wayne Ellington, Dion Waiters, James Johnson, Willie Reed and Luke Babbitt. All these players have something to play for as they get ready for a huge financial summer in 2017. Their skills, ability to adjust to a system, instincts, mannerisms and hard work will be watched carefully.

Starting point guard Goran Dragic will finally get his turn to a run a preferred, faster offensive scheme as he gets to command more of a leadership role. When the Heat pointed their offense to Dragic last season, they flourished as one of the premiere Eastern Conference squads after the All-Star break. Couple that with a band of youngsters, who the Slovenian guard already has chemistry with, and be ready to see some fireworks next season.

On top of all this, All-Star forward Chris Bosh may be in attendance as well. If the power forward can make it to the floor, it seems like an absolute lock for the team to make the playoffs. The veteran’s poise and presence will be ultra healthy for the Heat next season.

However, if Bosh is unable to play, the Heat have enough to make it work. Especially with a head coach like Erik Spoelstra, who’s been instrumental in making the best out of what he’s had.

It won’t be easy next year. Still, it’ll be a fun and competitive season. Riley put together a team full of players with something to play for. Fighting ’till the end of the season, this Heat team could very well finish with one of the final playoff spots. A motivated and talented group is always a great combo for a playoff competitor and that’s exactly what the Heat have.
[xyz-ihs snippet=”Responsive-ImagenText”]