Are the Miami Heat Better Without Hassan Whiteside? 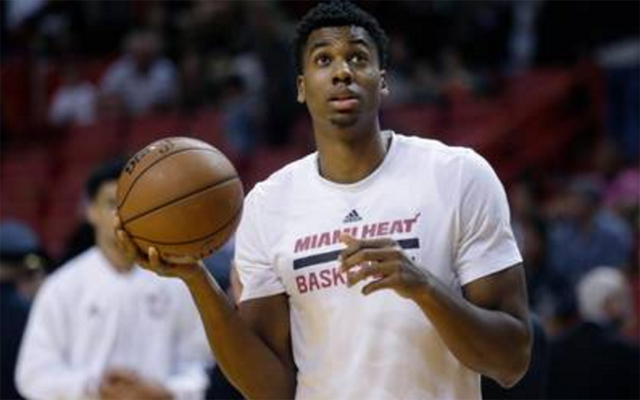 Miami Heat standout center and league-leading shot blocker, Hassan Whiteside, has missed the team’s last six games with an oblique injury. Meanwhile, Miami is rolling. They’ve won four of their last five games without their big man and the question begs to be asked; are the Heat better without him?

Whiteside bursted onto the scene last season as a seven-foot paint monster, capable of clogging the lane and sending blocked balls out of arenas. He’s been able to rack up three triple-doubles with blocks since last season, most in the NBA over that span, and has turned heads around the league with his freakish abilities and sudden rise to relevancy. However, as the Heat keep winning without him, more and more experts are questioning his fit with the team.

Whiteside was just named the NBA’s Defensive Player of the Month for January, but since he’s been out with injury, the Heat have reverted back to the small-ball ways that helped win back-to-back championships in 2012 and 2013.

As a result, the team is scoring and moving the ball more efficiently. The aging Amar’e Stoudemire has been starting games at the center position and looks to have carved out a definitive role on the offensive end: catching lobs, loose balls and high passes from Dwyane Wade and finding efficient ways to get the ball into the rim.

Stoudemire, although a much more polished offensive talent than Whiteside, is still a whole lot older and a much more injury-prone player than his younger, stronger counterpart. Regardless, the Heat have looked better with him and his limited minutes at center than they have, at times, with Whiteside.

When Stoudemire sits, guys like Chris Bosh and Josh McRoberts have filled in as big men in virtually center-less lineups, and that small ball mentality has produced a faster pace and a more offensively potent team, resulting in a more cohesive looking unit. So, are the Heat really better without Whiteside? At the moment, it’s hard to produce a definitive answer.

The eye-test says “yes” but the gut-feeling of those close to the Heat say “not so fast.” Whiteside is a rare combination of size, athletic ability and talent that nobody around Miami is ready to give up on just yet. While local publications like The Sun Sentinel and the Miami New Times are writing pieces about how the Heat look better without Whiteside, it’s hard to believe that Pat Riley and company would buy into the anti-Whiteside hype this soon. The word, however, is getting out, and Whiteside has noticed.

“This might surprise you. The Miami Heat are statistically better this season without Hassan Whiteside. The Heat have 80.2 Def REB% with Chris Bosh and Justise Winslow on the floor, which ties the best in the NBA. The Heat have a defensive rating (the lower the better) of 102.0 with Whiteside on the court and a 96.5 rating with him off the court. “

“What is the reason to post dum shit like this? The heat change the whole offense after the Wizards game. I just happened to be hurt now. We on a run. Not our first. Not our last. Be happy we went on 3 3-0 runs while I played… Be happy to have both PGs back.”

Whiteside has a point, there. The Heat had their fair share of success with him in the lineup, as well. Their struggles only began to culminate to a peak when they went on their seven-game Western Conference road trip and had all that trouble with consistency. In addition, Goran Dragic is back as the starting point guard, which is clearly helping the flow of the offense, and Stoudemire is finally playing steady minutes, which is allowing him to get into a rhythm.

We tend to have these knee-jerk reactions whenever we see statistics that point one way or the other, but forget to consider other important factors. Head coach Erik Spoesltra is still tinkering with lineups, and Wade is flat out balling. Dragic is back looking like the player he was in Phoenix, etc. In addition, it’s only been six games! How’s that for a small sample size? For this brief moment, sure, it looks like the team runs better without Whiteside, but when all things are considered, a pumping of the brakes may be in order.

Conversely, it should be noted that Whiteside is widely considered to be a max-contract player going into next season. With the recent success the Heat have seen without him in the lineup, coupled with the fact that we all know Riley will make his run at Kevin Durant in the offseason, the Heat organization will have to at least consider moving on without their precious big man as they head into 2016-17. If the Heat continue to win without their seven footer, or they start losing their rhythm upon his return, then the question of his worth and general fit will be more valid to ask. Until then, let’s all relax. We haven’t even reached the All-Star break yet.

It will be interesting for Heat Nation to watch what happens upon his return, though. Perhaps Spoelstra will find a clever, more efficient way to keep him in the lineup; perhaps even in a bench role, leading the second unit. Until then, the organization fully backs their seven-foot, shot-blocking menace, and is undoubtedly elated to have a talent like him on the roster.
[xyz-ihs snippet=”Responsive-Ad”]